Spending a lot of time developing websites with Sitecore means I've reported my fair share of bugs to support. One particular issue that I came across in 6.6 a while back stands out as my "favourite" issue I've reported – just because the error stops a lot of developers in their tracks thinking "how on earth can this happen?". If you wrote this code, would you think it could crash?

Well it can crash. And to a less experienced developer it can be a very confusing error:

How can a comparison with null throw a Null Reference exception?

Well the answer is Operator Overloads. You can write a method to change the behaviour of operators like == or != for specific types and if you write it badly it can fail at runtime.

If you dig into the code for Sitecore with your preferred decompiling tool, and look at the ShortID class you'll find this: 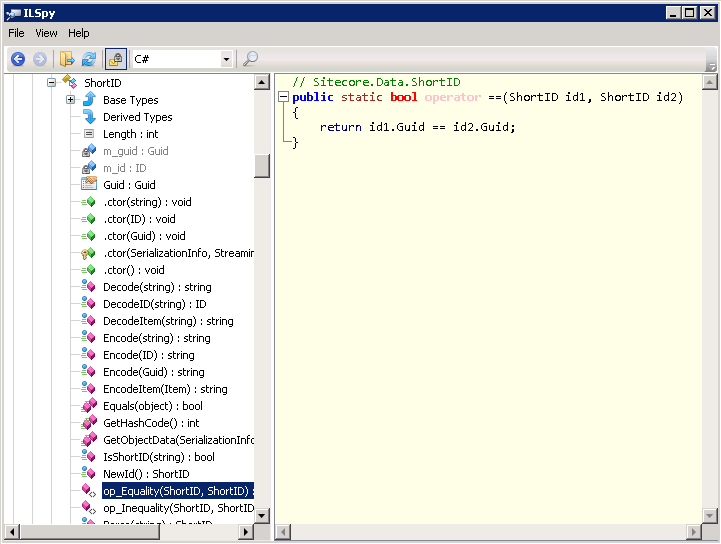 When you compare two ShortID values with the == operator the method above gets run. And as you can see it tries to make use of a properties of the objects being passed in without checking them for null. So if any of them are null, you get a Null Reference exception. You'll also see the same behaviour if you try to compare a ShortID with an ID and the ShortID is null.

This isn't correct behaviour, and it's been reported to Sitecore as a bug – so hopefully it'll get fixed in a future release. But in the meantime, if you see this issue, don't get confused – just use the ShortID.Equals() method to check for nulls instead:

This code will behave correctly.