Recently I was looking into how custom caching might improve the performance of Layouts in Sitecore. But one important aspect of the concept of improving performance with tricks like that which I didn't discuss was how you can work out places where caching will give you benefits...

The first thing to emphasise here is that measurement is your friend. Improving performance can be a tricky subject, so you need to have some meaningful numbers to base your work on. It's not uncommon to make an "improvement" to some code which, for complicated reasons due to compilers and CPU architectures etc. actually end up slower than the original code. And you need to make sure your measurements are repeatable.

For the work I was doing recently, I combined two techniques:

How fast is a page request?

First, for a raw view of "how long does it take to render the mark-up for a page" I timed how long a few thousand requests to a particular page took, and averaged that time. There are loads of tools you can use to investigate things like this, but for simplicity (and because I'm a big fan of it), I hacked up a quick script in LinqPad to time the requests. It looked like:

Fetching only the HTML helps by filtering out the code that generates pages from the code that does things like resize images or bundle Javascript. Focusing your tests like this helps get a clearer view of code performance. You can, of course, run separate tests for fetching CSS / Javascript or images and do performance work on those paths too.

The result of running the script above is an estimation of the average response time for the code per fetch of the HTML: 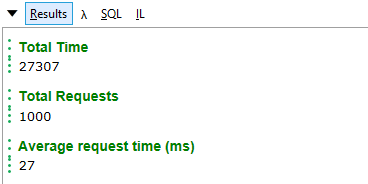 And what is the machine doing all that time?

The second measurement I took was to attach Visual Studio 2015's profiler to my site, and then re-run the load script above. It's not entirely easy finding how you do this to begin with, but the "attach it to an external process" option for the profiler hides here: 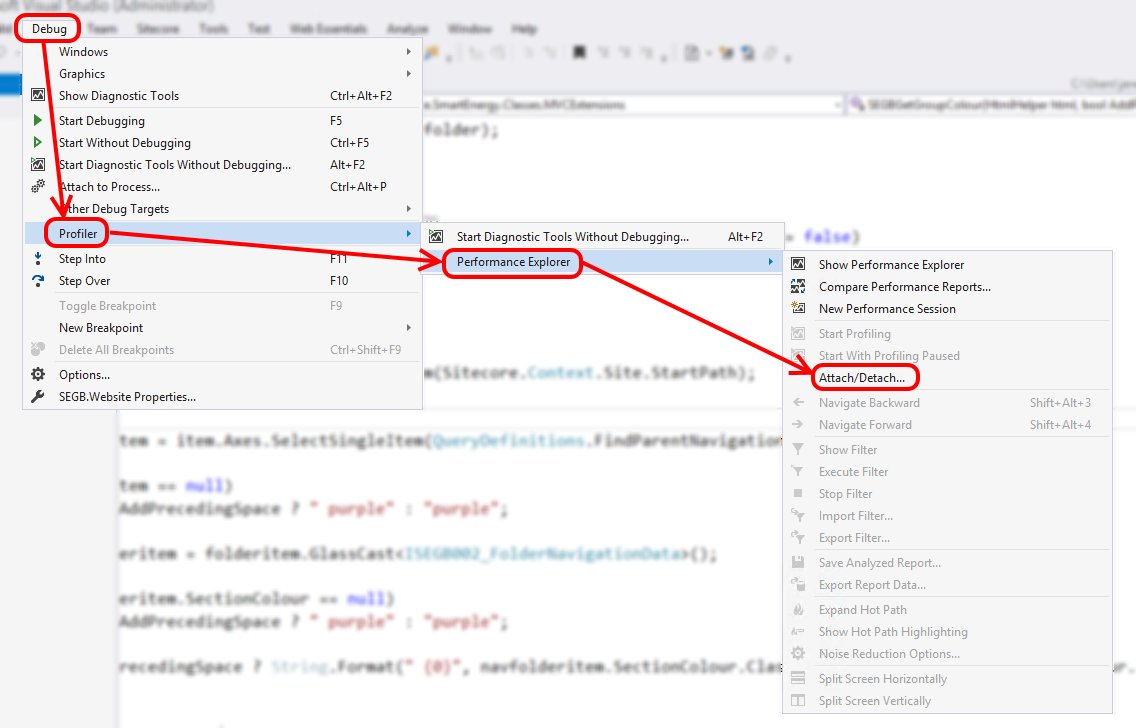 you can generate your load again (by running the script above again in my case), and once that's done you can click the "Stop" link in Visual Studio. At that point you get a shiny report: 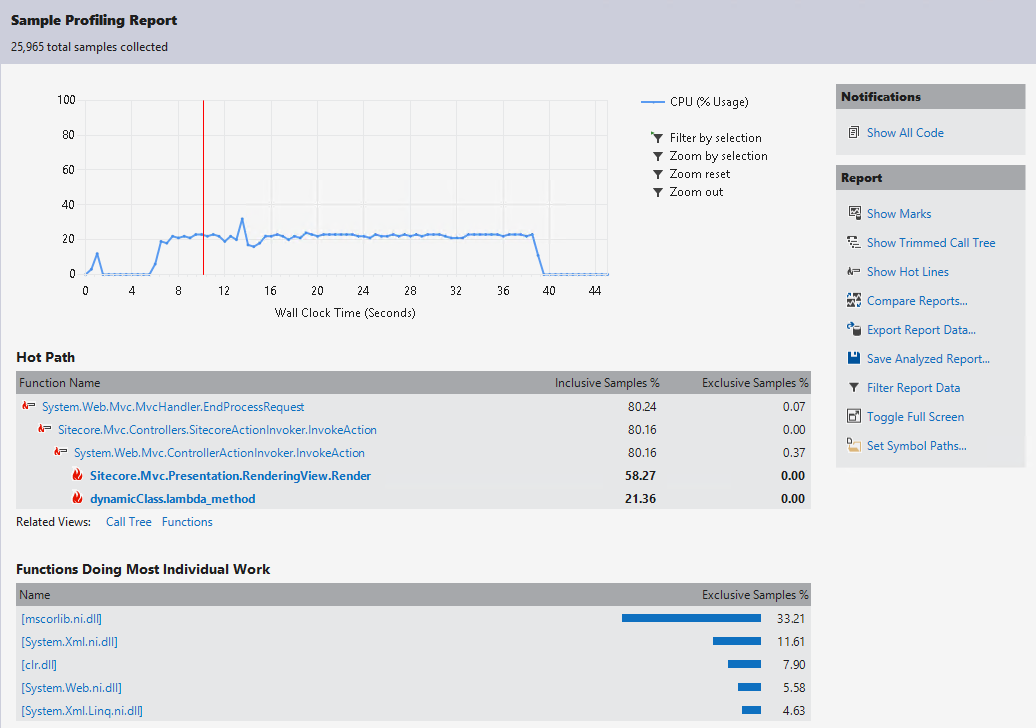 That's all very pretty, but it's not massively helpful in itself. Unsurprisingly, the code taking up the most CPU time in the summary is .Net and Sitecore code – neither of which offer much chance for you to optimise. So change the report from the "Summary" view that's the default to the "Modules" view, and click the "Inclusive Samples %" column to sort the list by "how many times the profiler found itself in a particular function and its children". That gives you a list where you can easily see the relative effort of your code versus the rest of the system: 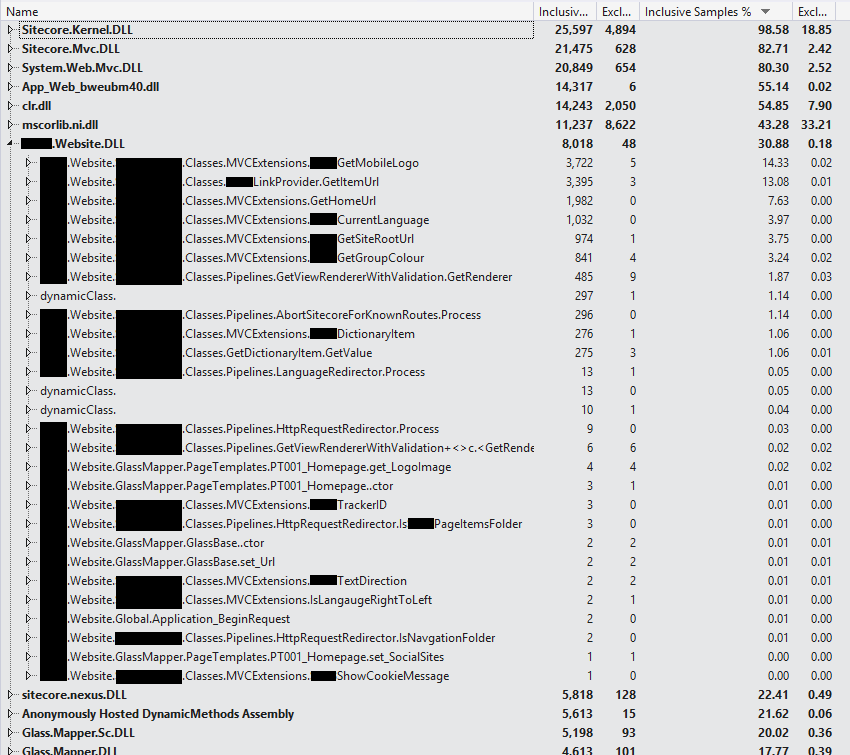 Note to self: Choose an example that requires less redacting next time... 😉

Then you optimise, and measure some more...

Now you can see which bits of your code get called the most and take up the most time, you can focus your efforts in improving performance on these.

Try out whatever techniques seem to make sense to the code you're looking at. On top of the usual Sitecore caching options, you can look at things like:

But for each change you make, you should measure again. If the change was effective you should see a repeatable fall in the load time. For example, when I applied my custom caching trick to the calls under MVCExtensions in the trace above, I saw:

A small, but significant improvement with each request. And you should see the relevant bit of code dropping down the profiling list as well.

It's probably worth pointing out that the profiling and the fact you're probably testing against development hardware will have a performance impact on your code – so you shouldn't treat any numbers here as absolute timings. It's relative changes that you need to think about for the purposes of this sort of work.

You may also want to run similar tests against requests for images (or other resources being served out of Sitecore) that involve any custom code.

And repeat to fade...

You can keep repeating this process of "measure, find a thing, improve it, measure again" as long as you can find things in your code to improve that offer a reasonable effort / reward benefit.