A while back I wrote a couple of posts on the subject of how code pipelines can work in a more functional .Net world. I've made use of those patterns in some code of my own, and I've found these posts have generated quite a lot of questions from readers here and followers on twitter. But I've never been quite happy with the implementation in my own code...

The key place I'd made use of these patterns was in my homebrew RSS reader tool. That has two pipelines in its update logic: The first takes a feed URL and transforms it into a set of "post" objects that need processing. The second takes a post object and transforms it (by fetching HTML, removing scripts, working out dates etc) into a complete entry for the content database.

Now the thing that didn't really fit here was that any attempt to fetch data over the internet can fail, but my original pipeline couldn't really handle that gracefully. You could either throw an exception that was caught outside of the pipeline, or you could include data in the pipeline's output model that specified what had gone wrong. But to my mind, neither of these is really the right way of solving the problem.

So how could you adapt the original pipeline model to better describe problems?

Stealing another idea from Functional programming

The world of functional programming tries to solve issues like this with a wrapper type often refered to as "Either". This represents a result that can be one of two types. It's generally used to wrap "Either a success object or a failure object", but it can also be used to handle a situation where you can have two different successful results from an operation. So could we try and redefine the basic pipeline interfaces in terms of receiving and returning Either objects?

For the sort of pipeline I'm thinking about for my RSS Reader, we're probably thinking about a pipeline that can return either a successful data object, or an error exception that occurred while the data was being processed. So the type looks something like:

So we have a type that can store either a success or a failure, of whatever type is needed, and it's fairly simple. Now another thing that will be helpful for this later is to have some implicit conversions between the Either type and the two types it wraps. The conversion definitions aren't wildly readable to my mind, but to cast the object either way we need:

With that object in place, we need to re-define the basic pipeline step in terms of Either:

And as before the overall pipeline is defined as having the same interface as an individual step, and having the set of steps collected together:

And we can have an abstract base to implement some reusable code for the overall pipeline too:

In the previous implementation we had a helper extension method to make composing the pipeline steps together. That also needs redefining in terms of Either:

Now for individual steps, the logic changes a bit in this model becauuse they now have to cope with two scenarios. The input to any step can be one of two things: Some happy-path data to process or an error state. That means each step needs to make a decision about which path it's going to go down, and since that's pretty standard logic it seems like a good case for an abstract base type for the steps:

The Process() method now just decides whether the input is a success or failure type, and calls the appropriate method on it. Most of the time I think the failure path will just "do nothing and pass on the existing error", so that can be a virtual method with this as default behaviour. But the opposite is true for the success path – pretty much every pipeline step will have some custom logic here, so it makes sense for that to be an abstract method.

And that's most of the basic logic we need to try this out...

Lets make up some trivial pipeline steps to try this out. A very simple example of a step that might have an error is parsing a string to a number. So lets try a step that does that:

So the step is defined in terms of taking in a string, returning an integer or returning an exception. It doesn't have any behaviour for the "failure" path, so no need to override that method, but the happy path can try to parse the string and return either the integer or the exception.

(And note that thanks to the explicit conversions we defined before, there's no need to explicitly cast the return values – the compiler sorts that out for us)

Another simple test component could multiply our result by a float to get a float result:

In this case we're just trivially wrapping up the exception inside another exception – but it gives an indication of what can be done.

And with that in place we can then compose those components into a simple example pipeline:

So our pipeline will now take a string and give us back either a float or an exception, depending on what happens...

Now something else I realised when I started to try and set up some code to test out this example pipeline was that it would be helpful to have an easy way to process the result based on whether the Either represents success or failure. So stealing another pattern from the Functional world, I added a Match() method to Either which you pass a function to for success or failure:

And that allows us to write a simple test where we can call the test pipeline defined above with a set of test data to see what happens:

Which gives the expected results: 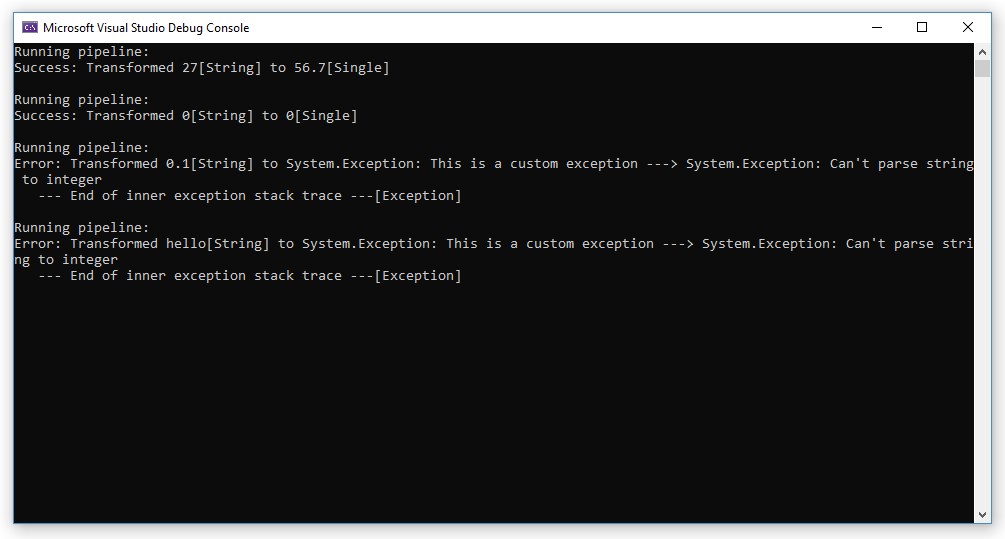 Where the pipeline can successfully process the input, the result is the expected data. And where it can't we get an exception wrapped up in the way the final component specified...

The code for this is available in a gist if you want it all together.

It does make the error handling pattern for the pipelines easier, I think – now that there's an explicit path for what happens to error data. I can see a way to recompose my RSS pipelines so that an error message comes out, and then a third pipeline that can translate an exception record from one of those pipelines into the "feed error" record that I want to store in my RSS reader's database. And once the infrastructure described above is in place, the individual pipeline components don't really change that much from what I had before.

But the counterpoint to that is that the interfaces of the various types involved in the pipeline infrastructure got more complex, and less readable as a result. And I'm not sure I've got to the bottom of the set of type casts and helper methods necessary to ensure that it's easy to use Either in the midst of other code.

But I'm pretty sure Functional developers have already solved those problems – I just need to work out what the rough edges I need to sort out are. And to be sure of what they are I need to write some more code using this pattern...