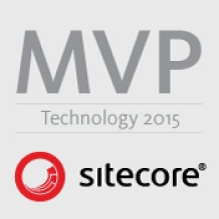 I'm very pleased to be able to announce that Sitecore have invited me to be part of their MVP community for 2015.

When I started writing this blog about a year ago, it was purely as an experiment. I'd spent years thinking "I could write about that" while I was solving problems at work, but never getting around to actually doing the writing. Starting this blog let me see if I really could translate those distracting ideas while I was working into a regular stream of content others might find useful.

58 posts later, I think it's safe to say the experiment has succeeded, and the writing has become a regular part of my week.

However, I'm both surprised an honoured to have my efforts recognised by Sitecore itself. And I have to admit to having a brief bout of Impostor Syndrome when I look at the list of other names that have been announced for this year.

But now I'm off to celebrate for a bit, before I start thinking about what I can write next...