Like many people around the internet, I've upgraded my computer to Windows 10 this weekend. So far I'm reasonably happy with the upgrade – most of my stuff has continued to work fine, and the few installation issues I hit were already well documented by the internet community. I will admit to a bit of "who moved my cheese" style frustration at some of the changes though – but I'm sure that will pass as I get used to them...

But I also came across one issue I wasn't expecting which I had a bit more trouble finding the answer to: What happens if your PC was connected to a Windows Server Essentials domain for backup and then you try to upgrade?

NB: I should point out that I was unable to make the "Windows Update" style upgrade to Windows 10 work. I eventually upgraded my laptop by via the Media Creation tool, burning the ISO to DVD and then running the upgrade from that. While this worked, it's possible my initial upgrade issues may have some relation to the following problems

Well, annoyingly, the answer is that the Windows 10 upgrade process quietly breaks this connection. It appears to remove the software installed when you joined your WSE domain. Though it doesn't appear to remove your machine from the WSE domain.

Putting it back should be simple – after all, when you first connected the computer to your WSE machine you just pointed your web browser to /connect/ on the server to download the relevant tools. But unfortunately that doesn't work with Windows 10 – the installer that the WSE box sends you has some hard coded "what Windows versions do I work on?" logic in it, and it doesn't know about Windows 10...

Cue half an hour with Google, before I hit upon the right set of keywords to come across this: Microsoft's post on the compatibility of the connector software with various releases of Windows. This admits that Win10 can't run the connector shipped with WSE, but it helpfully provides a link to a version which does work.

Having downloaded that and given it a go, I got stuck again. When you start the new connector configuration wizard it runs ok, but raises a few errors.

First it complained that your computer name is already registered. It seems logical to ignore this warning initially – it's the same machine, just with an operating system upgrade.

Then it complained that it cannot connect to the WSE server in order to connect you, and reports "server not available". This error is documented by Microsoft, but the workaround suggested didn't make sense in my case. Both my server and client were using the windows time servers to set their clocks, and were reporting the same time.

In both cases the wizard was taking an age to move between screens – in excess of five minutes in some cases.

Back to Google I went, and discovered a TechNet thread about people suffering similar sounding issues. The solution suggested here was uninstalling the connector software – which I tried with no success.

Thinking about the long time between wizard pages, I began to wonder if the issue was related to some sort of network timeout. My server and my recently upgraded client machine are on the same WLAN, and they definitely had connectivity as I could RDP to the server without issue. Back in my original post about installing my WSE box, I changed the configuration of the WSE Connector so that it would not update the DNS settings of my client machines. So I tried setting the primary DNS server back to the WSE box's IP address in case a name resolution failure was at fault. No luck. I also tried changing the machine name of my client PC to see if the "this machine name is already connected" error was related to my problems. But again, no luck.

My final throw of the dice was to try another setting from my previous post on WSE – telling the WSE Connector installer that it should ignore the "join the WSE Domain" part of its install process. This is done with a registry change. You can run the following command in an elevated shell:

This seems to have done the trick. My machine is still joined to the WSE domain, but with this setting, the wizard successfully connected the client machine and I was able to start a backup running: 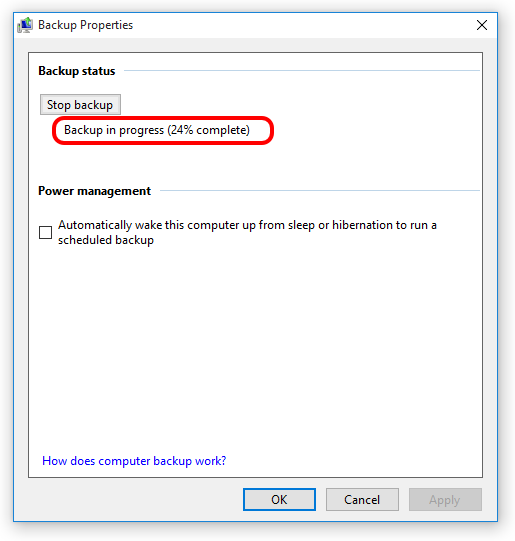 I may revisit this post in the future. I plan to spend a couple of weeks trying out Windows 10 before reformatting my PC and starting from scratch. Hopefully I'll have fewer connector issues with that approach – but if not, I'll write up the work-arounds I find.