A lot of projects I've worked on over the years have had requirements about consuming content feed data over the internet. Whether they're Sitecore projects or not, "we need to display the contents of an RSS Feed" is a fairly common requirement. It should be nice and simple. There are standards and schemas for feed formats like RSS and Atom, so the data should be predictable and easy to handle...

Unfortunately, back in the real world, this rarely seems to be the case. I still regularly come across feeds which don't match the schema, or in extreme cases feeds that aren't even well formed. Sadly some people still seem to think that string concatenation is the way to build XML...

So what are your choices for handling feed data, and how can you try and get around bad-data challenges?

In an ideal world, there are libraries for this

If you're in the lucky scenario of being confident in the quality of the feeds you're consuming, then there are some libraries you can make use of:

None of these libraries are particularly recent, but given that the schemas for the feeds have been stable for some time, this is probably not an issue.

If it's just schema issues, you can parse it yourself

If the data is well formed, but the schema being presented doesn't match the expectations of one of these libraries then you can just load the data as XML and process the elements yourself. The code for this can be as simple or as complex as you need. For example LINQ-to-XML can pull out titles easily:

Or you can use an XmlReader or even an XmlDocument - pick whatever approach best fits your needs and constraints.

But note the need to pay attention to namespaces in code for this. Many feeds have XML which include at least one namespace declaration, and "I didn't use namespaces correctly" is probably the number one reason for XML Parsing code not working the way you think it should.

Having spent a lot of time banging my head against badly formed markup in both work and personal projects, I recently hit upon an interesting new strategy. By design XML libraries aren't able to deal with badly formed data – it's an exceptional condition to them. But HTML parsers are used to the idea of un-closed elements, undeclared entities and other messed up data. So a library like the HTML Agility Pack has a lot of potential as an approach to getting as much info as you can from bad data...

The equivalent code to the examples above needs a little more effort, as the HtmlDocument class can't directly load a URL:

Now, while this looks great, and works for the title elements example above, if you try to parse out an RSS feed that contains <link>some url</link> elements, you'll find that you don't get the results you'd expect:

When I run the code above in LinqPad, I get back the right number of entries in the links collection, but their InnerText property is always an empty string.

This caused me a bit of head scratching at first, but it turns out that this is part of the Agility Pack's behaviour for parsing elements despite the potential for badly formed markup. The library assumes that the link element is empty, because that is how it's used in HTML. But that assumption is not true for the feed data we're parsing, since RSS uses it with text content.

Luckily the Agility Pack developers saw this issue coming, and gave you a way to change how it treats each element it parses. The HtmlNode object exposes a static collection called ElementFlags which describes what the parser should do with each element it encounters. It has a set of default values, but you're free to modify them: 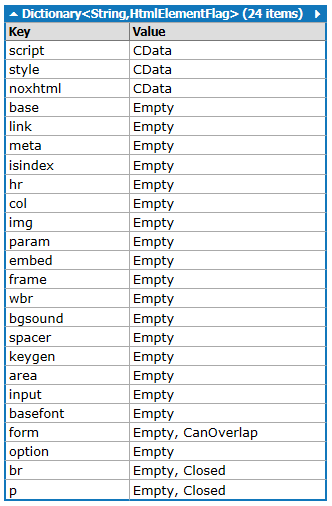 So to change the behaviour for link elements we can just remove that entry from the ElementFlags collection as below, and the parser will go back to treating it like a normal element containing text:

You may find other elements you need to adjust the behaviour for here. I've found that if you are parsing a feed which fails to close elements which should be closed, adding an explicit "this element should be closed" flag here can help parse the dodgy data. For example, if your feed has trouble with the title element, you can add:

It can't magically fix the data for you – but it won't throw, and will attempt to deal with the problem for you in a sensible way. What I've found is that if you try to parse something like this:

then you'll end up with a result set with one messed up entry, but the rest of the set of titles will be right:

The text for the title and link get concatenated in the broken <item/>, and the link text will be empty in this case.

It's not perfect – but in the scenarios I've been working with this result is better than an exception that leads to no feed data at all. And you can always have simple validation rules like "if parsing an entry returns no link, ignore it" to help weed out the entries that get messed up by badly structured XML.

So there you have it – some ideas for your toolbox...