I've had a Raspberry Pi sitting under my desk for some time now, but things keep getting in the way of me doing much with it. But in honour of the whole "March is for Makers" thing, I decided I needed to finally do something more than boot it up and let my son tinker with Scratch on it. I'd also acquired a "Sense Hat" add-on recently, and something about the matrix display on that made me think of animated graphs. Now that the Windows 10 IoT build is gaining features, I thought I'd try installing that and building something that would let me graph website activity – with a view to how it might get connected to Sitecore...

The idea I had was pretty simple: Incoming web requests to the Pi can indicate events, and some code can count them. Once a specified span of time has elapsed, the count can get plotted as a bar on a graph, and the code can start counting again for the next bar. That means we need:

But the first step is to follow Microsoft's instructions for installing Win10 on your Pi, and then add the appropriate bits to Visual Studio for creating a new "headless" project. Then, on to the code:

To keep track of data for the graph we need an object that can count any incoming events over a span of time, and then keep a queue of previous counts. That history will form the data for the bar graph, and let it animate to show how time is changing the values. As we'll see later, incoming event messages are going to appear on one thread, and separately a timer will indicate when to update the graph. Because we don't know what threads will make these requests, we need to make sure that the code copes with multi-threaded access. That means we need something to base a lock on. We also need somewhere to keep track of the event count for the current span of time, as well as a queue to keep a set of historical values:

The Track() method adds the number of events specified to the current count. This operation is guarded by a lock to ensure that we don't try to update the current count while we're also trying to move that data into the queue.

Note that this class is sealed in order to meet the requirements of exportable classes in Universal apps - the compiler requires them to be sealed.

Making a simple HTTP receiver requires us to create an HTTP listener and then raise events to the application, passing back appropriate data. There's some example code provided by Microsoft which can be adapted to meet the requirements here:

The class binds the specified port, and waits for requests. For each one that appears, it parses the data supplied to extract the a posted value and any origin data supplied. It then returns an "ok" message to indicate that data was accepted. The Origin header is necessary if you're going to use AJAX-style requests across domains to record events. Note that this code simply records the incoming origin and plays back the same origin when it returns its response. That will allow any other domain to make requests – you would probably want to tie this down to only accepting some origins if this code was ever exposed to the internet.

It's also worth knowing that acting as an internet server is a feature that you have to tell the Windows runtime you require when writing IoT applications. The application's manifest data needs to include data specifing this. It can be set in the UI by double-clicking the project's manifest file and ensuring that the "Internet (Client & Server)" option is checked: 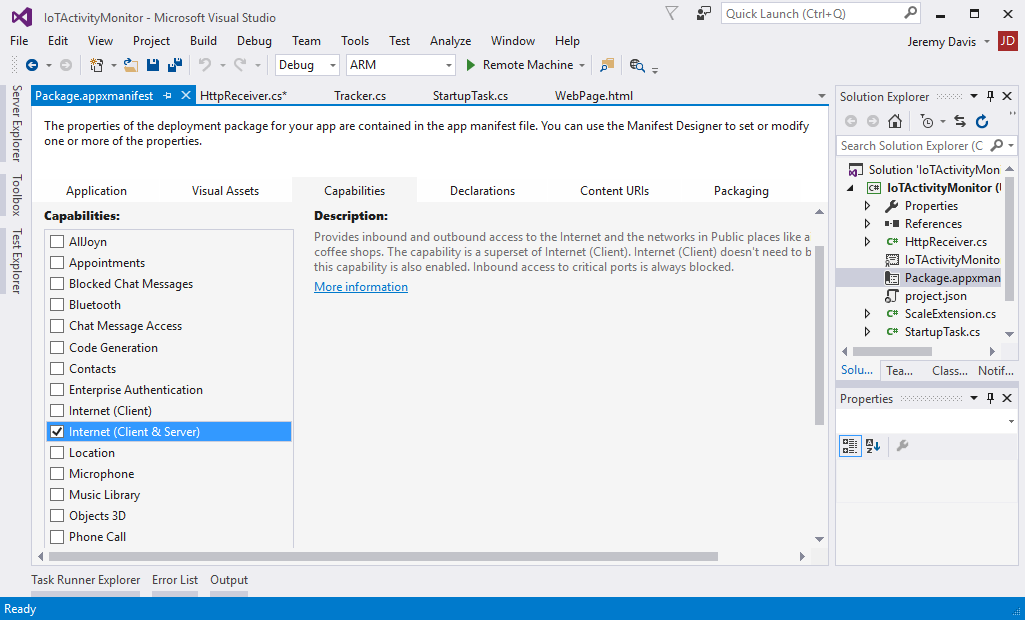 The next feature that we need is the ability to draw on the Sense Hat's display. It turns out this is much simpler than you might expect, as someone's already done the heavy lifting of accessing the Sense Hat's features via windows. The "RPi.SenseHat" repository by Emmellsoft provides all the features we need.

The whole device is wrapped up in an object you can obtain via an async call:

And we can draw on the screen by setting individual pixels to a specific colour:

And then once all the updates are done, refresh the display:

The display is represented by an 8×8 array of Colour entries.
(The library does loads more than this - but this is all we need to get started)

Pulling it all together

The entry-point class for our app needs to pull together the HTTP server, the event tracker and the display code. We're running asynchronous code here, so we need to make sure that the application doesn't accidentally end while it's waiting for these events – so we need to ensure we have a "Deferral" object to signal to the runtime that the app should keep running. Also, we're building a "headless" application here – one which does not require the traditional Windows UI. This is equivalent to the IoT equivalent of a Windows Service. So the main class of the application becomes:

It (synchronously in this case) gets an instance of the Sense Hat wrapper, and makes sure we have the "deferral" object we need to prevent the application being terminated before we're done. It then binds the HTTP server to a port and sets up a handler for incoming requests. The webMessage() handler tries to parse a number of events to record out of the data from the request, and then records that value using the tracker object.

Finally it creates a timer event which will cause the graph to be updated every second, before clearing the Sense Hat's display.

Each time that timer calls its handler, it runs the code to update the graph:

When the timer ticks, the code captures the data from the tracker object. It then reverses the order of the data, scales it to fit the 8 pixel high display, and returns an array. The code can then loop through each of the pixels on the display and set their colour based on the graph information. The helper function colourFor() returns the right colour for a pixel. The graph is drawn with green bars, topped with red.

Dynamically scaling the graph to ensure that the largest value never exceeds 8 pixels high is achieved via an extension method:

This simply returns a new enumerable where the values have been scaled appropriately.

In order to test the code running on the Pi we need a way to generate requests. A simple way to achieve that is with a bit of HTML and jQuery to fire AJAX requests:
(NB: missed out for clarity)

Each time the "Fire an event" link is clicked, an HTTP request is sent to the Pi, and the success or failure of the request is shown on screen. If we load that HTML file in a browser we get this: 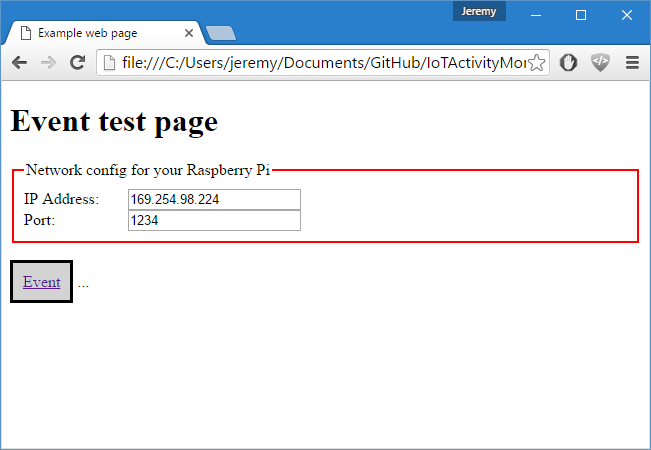 If we fire up the code on the Pi and then click the "event" button a bit, we'll see something like this:

The graph animates nicely, and will re-scale itself dynamically to ensure that it always fits vertically into the 8 "pixels" of the display.

So how can we get an actual website to generate requests? Well the simplest approach would be to do something very similar to what's shown above for testing. If you add a bit of jQuery to each page in the same way you'd add analytics javascript, you can get each rendered page to send an event to the Pi.

That approach will also work in a Sitecore website – but there are other ways you could wire it up here too.

It could also be wired up server-side by implementing a custom pipeline step or event handler. There's all sorts of stuff you could track via this route. Instead of tracking page requests via the <HttpRequestBegin> pipeline, you might want to track item saves on happening on your server via the item:saved event. At it's very simplest, that could could be some code like this:

With a little more effort, it would be sensible for the event code to pick up its target URL from configuration. For high load sites it might also be sensible to batch up requests on the server and pass the number in the batch, using a Post request as in the Javascript above.

Sitecore has a vast number of different pipelines and events that you might track. With a bit more code it would be fairly easy to allow the Pi to track data for multiple different events here, and swap between displays for each of them using the Sense Hat's joystick.

But who knows when I'll have some free evenings to give that a go...