I've been reinstalling some PCs recently, and one of them is the machine I play games on in front of the TV. My eldest child still enjoys a bit of Minecraft every so often, so I needed to put that back on my freshly formatted machine – but this proved more difficult than I was expecting.

I'm pretty sure I must have encountered this issue before, but since googling failed to find my blog, I seem to have failed to write the solution down last time 😉 So, in order to save my future self working this out for third time...

Having downloaded the latest installer for Minecraft and run it, it all seemed to be going fine. But starting the "launcher" app after the installation completed, nothing happened. After a few minutes of inactivity, I fired up task manager to check on what was up and saw the launcher had spawned two processes, one of which was doing some work:

A bit of googling and thinking lead me to remembering the most obvious difference between this install and the last machine I'd put Minecraft on without issues was that I'd moved the "users" folder on this machine to a separate volume. That meant the default working directory under "c:\users" which was actually a symbolic link rather than a real directory.

Further googling lead me to the the discovery that the Minecraft launcher has some command line options – one of which allows you to move its working directory. So I tried modifying the shortcut for the launcher to specify a working directory that wasn't in my user's folder: 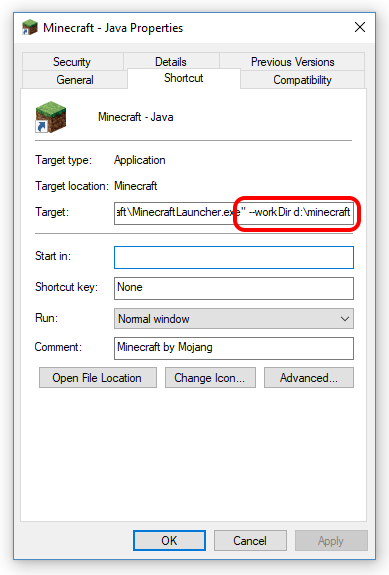 And running that worked fine. Success.

So it seems some aspect of the launcher doesn't like having it's working directory on the other end of a Symbolic Link.