After last week's look at the basic setup of Windows features via PowerShell DSC, this week I'm looking at adding MongoDB into the mix. I wrote a post a while back about installing MongoDB via ordinary PowerShell, this post can re-purpose that logic in a new form...

Before I get going, couple of notes about the examples I'm including in this series of posts: They all have a call to `Start-DSCConfiguration` using the "-Force" flag to make DSC run this configuration immediately in "push" mode. However, the `Configuration` blocks declared should all work in pull configurations. Writing the scripts this way just makes them easier for people to try out without any other setup effort. Also the examples are all pretty much self-contained, so the overall configuration of a server using them would rely on many separate scripts. You don't necessarily need to have as many as I'm showing here. It's more to keep the examples clear and usable than to represent the "right" architecture. You're free to merge things together, or even break them apart further if that suits you.

Configuration for this installation

There are various bits of the Mongo installation that it would be useful to make configurable.

We'll need somewhere to stick temporary files used by the installation, and we'll need assorted settings for MongoDB itself. We can extend the basic configuration data with the right new things:

The TempFolder path will be the place we stick any files we need to copy over as part of the installation. Under the Mongo dictionary entry are all the setting for MongoDB and its components. I'll explain these as they're used below.

This is basically the same as we saw last week – it needs a Configuration, it needs the parameter for finding the dependencies, and it needs the Node that works out what servers the resources we're defining will be used on:

The resources in the examples below can all be added into the Node block here.

First of all, MongoDB needs folders to store its data in. The File resource in DSC can be used both for copying files and folders, or for creating them. So combining that with the configuration above we can create the right folders:

By not supplying a Source for these resources and by setting Type to "Directory" we're telling DSC to create the folders specified by the DestinationPath. The value of that path comes from the configuration properties above. (I wrote a previous post about how DSC resolves these variables, which will help explain that)

The next thing we'll need is the config file for the MongoDB service. In my previous script I was generating that directly as the script ran, but for this version I've made this file a dependency of the script. Hence we can use another File resource to copy it over to our Mongo data directory:

Here the SourcePath is specified using the -PackagePath parameter to our Configuration so we can find the source file. That file includes some variables which need to be resolved though. My basic example config contains:

(You can, of course, add whatever extra MongoDB configuration you need here)

We then need a bit of code to transform the $MongoDataFolder variables here into the correct path. We can do that with a Script resource - these let us run ordinary PowerShell code in our DSC file.

Script resources have three other key properties that we need to fill in. These represent three specific scripts which get run at different times. The GetScript property can be used to return a dictionary of values describing the current state of a resource. The TestScript property contains code that checks whether the resource has any work to do. It returns false if there is work to do, and true if there is not.

For the purposes of this resource, these two scripts aren't particularly important, so they're not filled in here.

The final property is SetScript, and this is the one which does all the hard work:

An important point to note is that these script blocks have an interesting challenge. Because the code in them runs when your .MOF file is executed, not when the DSC script is compiled into the .MOF. Hence you have to be very careful about the scope of the variables you refer to. (This is discussed in my previous post on DSC variables) But the key thing here is that when we access config variables that are coming from the $Node dictionary we have to use the special $using:Node syntax to make sure the values are correctly processed.

Other than that the code's simple – it just reads the base config file from disk, replaces the variable names with their value, and then writes the result back out again...

So the next step is installing MongoDB itself. That needs two steps. The first is a simple one to copy the installer over from our folder full of dependencies into our local temporary folder:

Then we can run the installation. Helpfully DSC has a resource whose purpose is installing .EXE and .MSI packages. While it's a bit restrictive about the packages it can install, MongoDB plays nicely with it, so we can use the Package resource as follows:

Again we have a dependency here - we can't install the package until it's been copied into our temp folder. But there are two other things which need pointing out. The first is the Arguments property, which you use to pass in any parameters for the install package. In this case we're just saying "install everything".

The second is the Name and ProductID properties. These two are used to specify how DSC can test if your package is installed already or not. (Remember that DSC attempts to avoid repeating tasks it doesn't have to) You only have to specify one of these parameters. Name needs to be the text which appears in the "uninstall programs" list in Windows, and ProductID is the unique package GUID for the installer. Generally, Name is easier to find. I've made it a parameter here, as this will change with different versions of MongoDB – so if we specify a different installer in our config we need to specify a different Name as well.

Configuring MongoDB as a service

As I discussed in my previous Mongo post, running the installer gets you the executables on disk, but it doesn't install them as a service. Doing that involves two steps. The first is to instruct MongoDB to add itself into the list of services on the machine. That requires some custom code, so we need another Script resource:

With this one I've filled in the GetScript with some code that uses a call to the WMI API to ask for a list of any services called "Mongo" that are currently running. It then uses this data to create a dictionary containing a boolean to say whether the service is installed, and how many instances have been found. The TestScript property uses a similar query to decide if the installation needs to proceed or not.

In the SetScript block, it extracts the various config variables, works out the path to the Mongo executable and its config file, and then it runs the .EXE passing in the --config and --install parameters to tell it to set itself up as a service.

Once that's done, the second step is that we need to make sure our service is configured to start automatically. Luckily, DSC has a resource called Service which can deal with changing the state of Windows services. All we have to do is specify the name of the service, how we want it to start up and what state it should be in now:

With that done, we have MongoDB running as a service in the background.

MongoDB is available as a .EXE installer, but this one isn't well behaved enough to use with the Package resource, so this code uses the .ZIP version of RoboMongo. The first thing to do is to grab a copy of this from our dependencies folder:

With the file copied over, then we have to unzip it. Again, DSC provides us a helpful resource: Archive can unpack a zip file. This uses the $Env:ProgramFiles variable to find the appropriate place to unpack the zip to:

You can run RoboMongo now, but it's easier if we have an icon to click on rather than having to go find it in the Program Files folder. So we can use another Script resource to add an icon to a user's desktop via the Windows Shell's COM API:

Here the GetScript and TestScript code checks to see if the icon file exists with a simple check against the file system.

The SetScript extracts the correct variables and calculates the location of the user's desktop. It can then create and call the WScript.Shell COM object to create and save the shortcut.

And with that done, you can fire up RoboMongo and check out what's in your MongoDB data store: 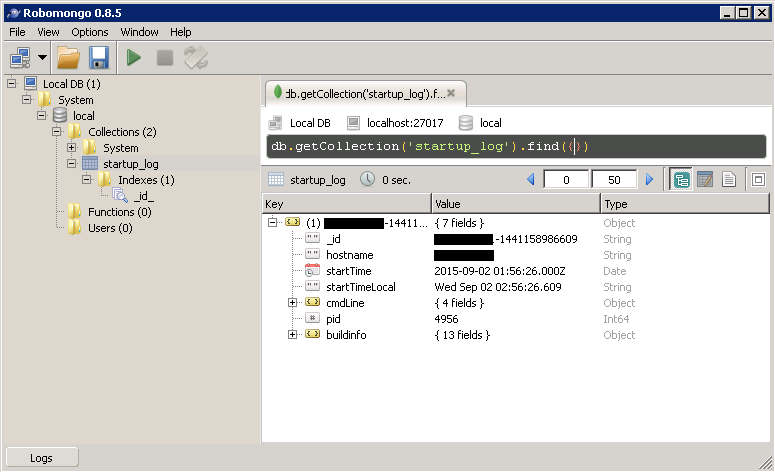 Next week, we'll turn out attention to SQL Server.